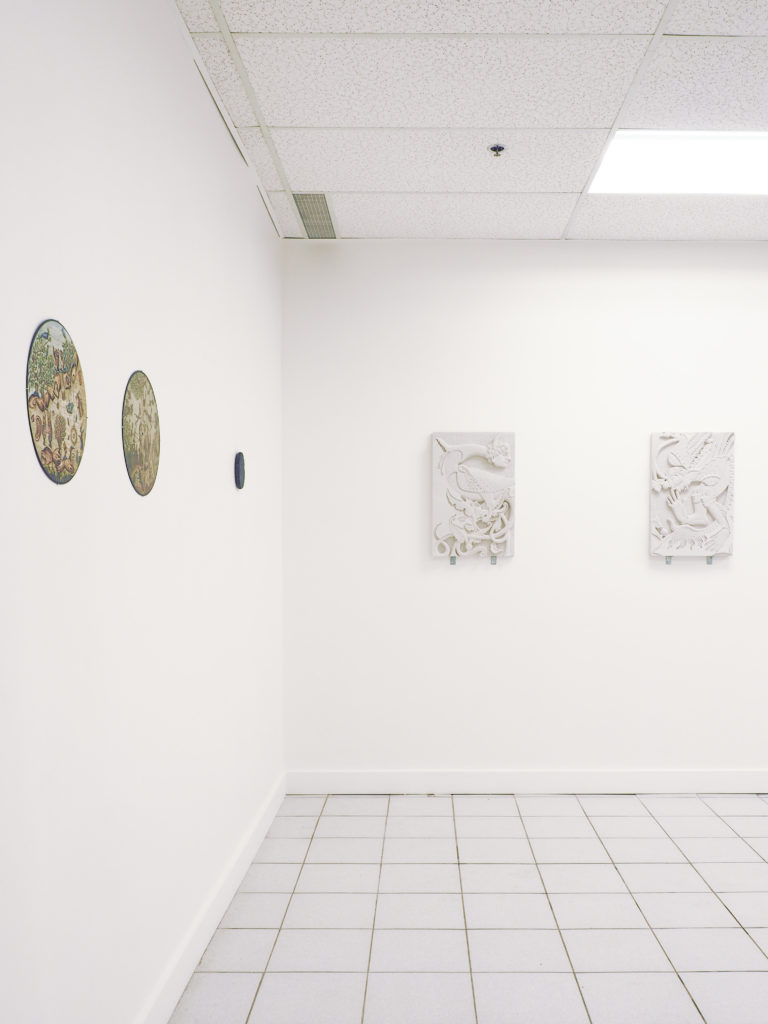 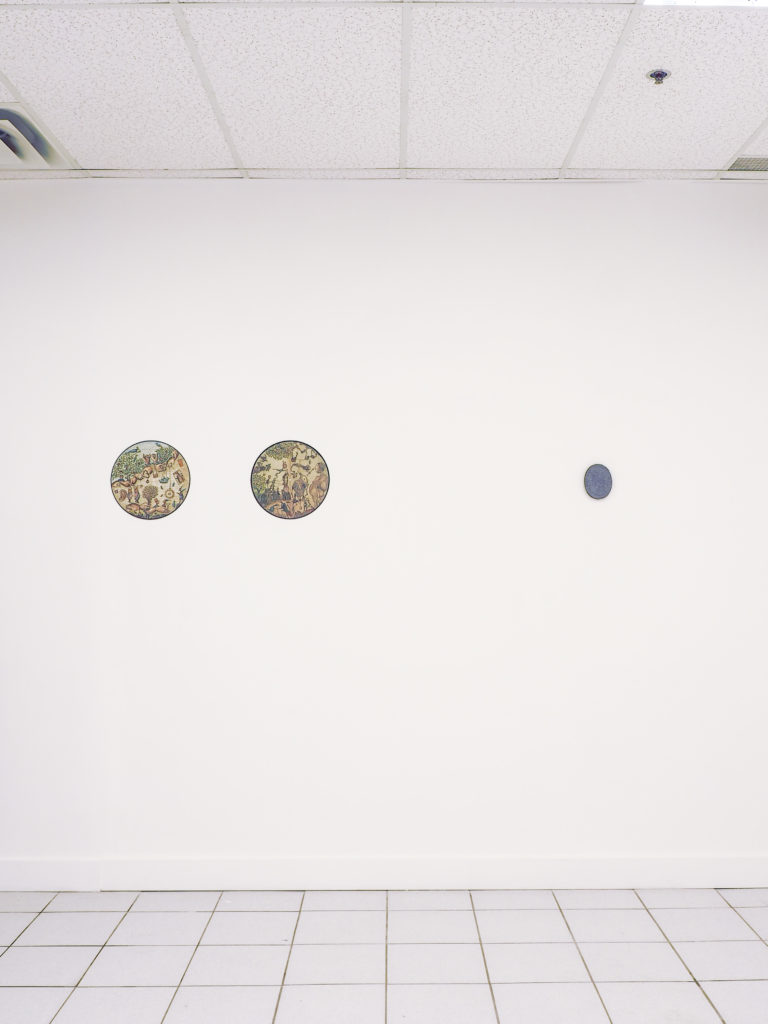 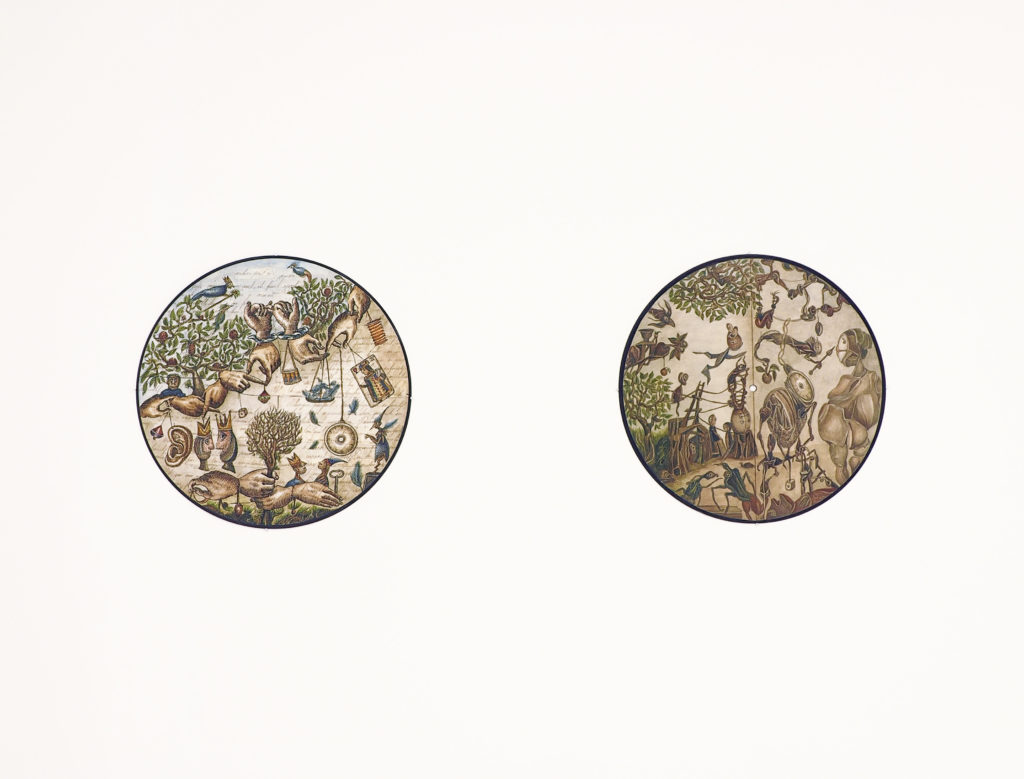 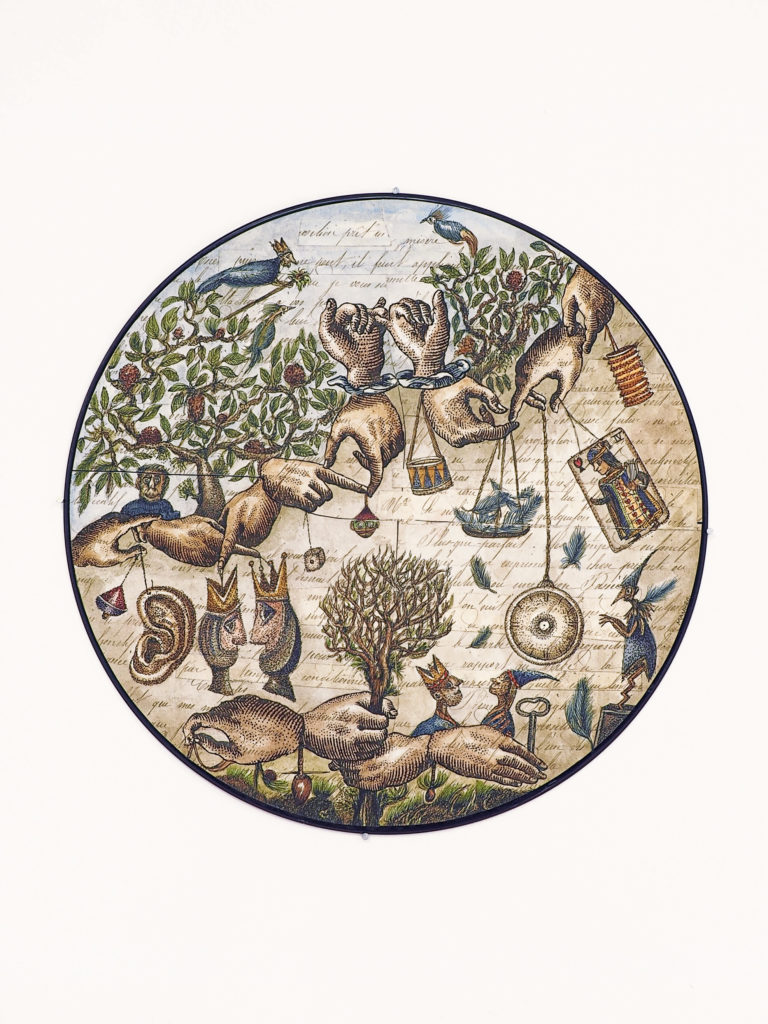 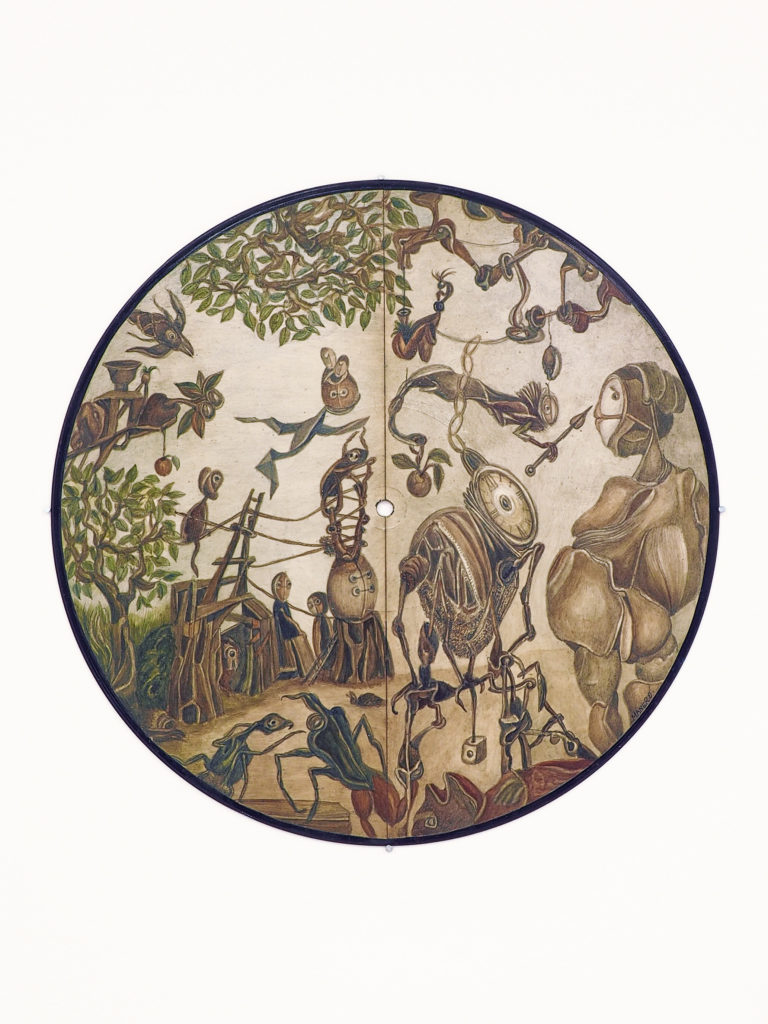 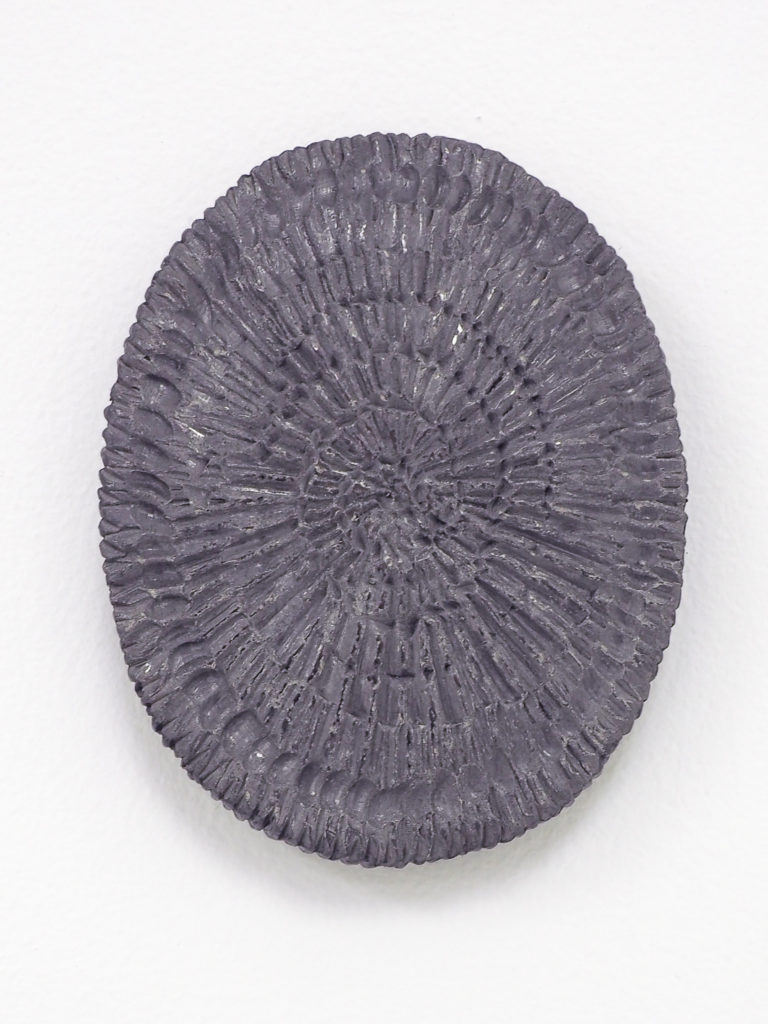 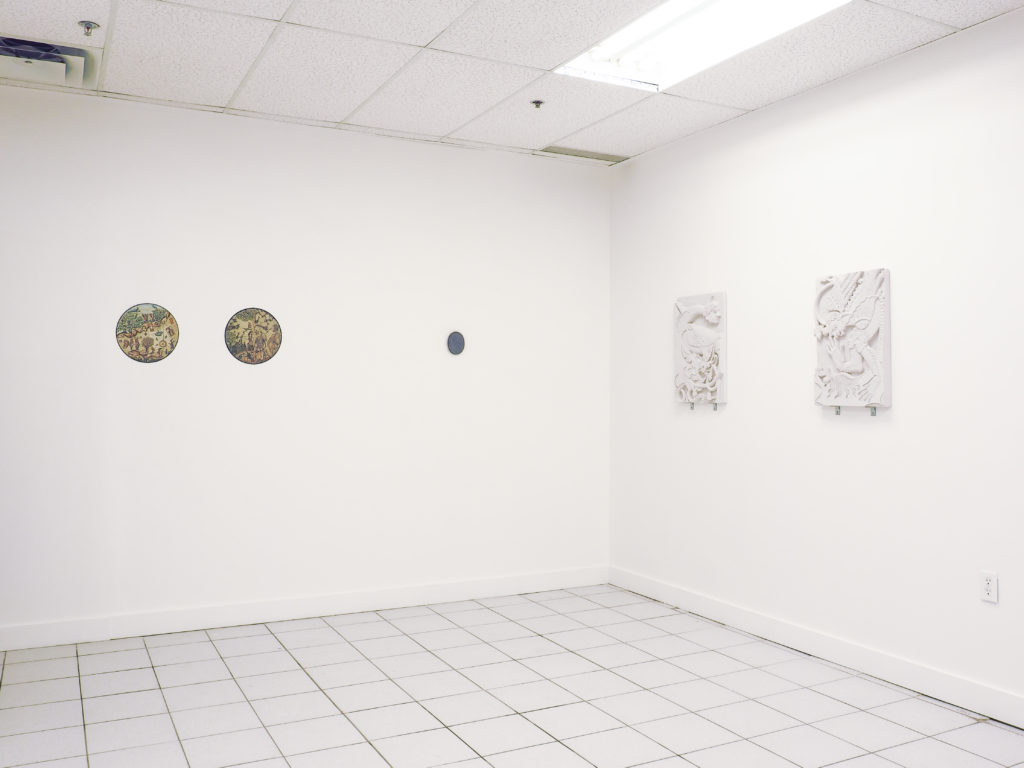 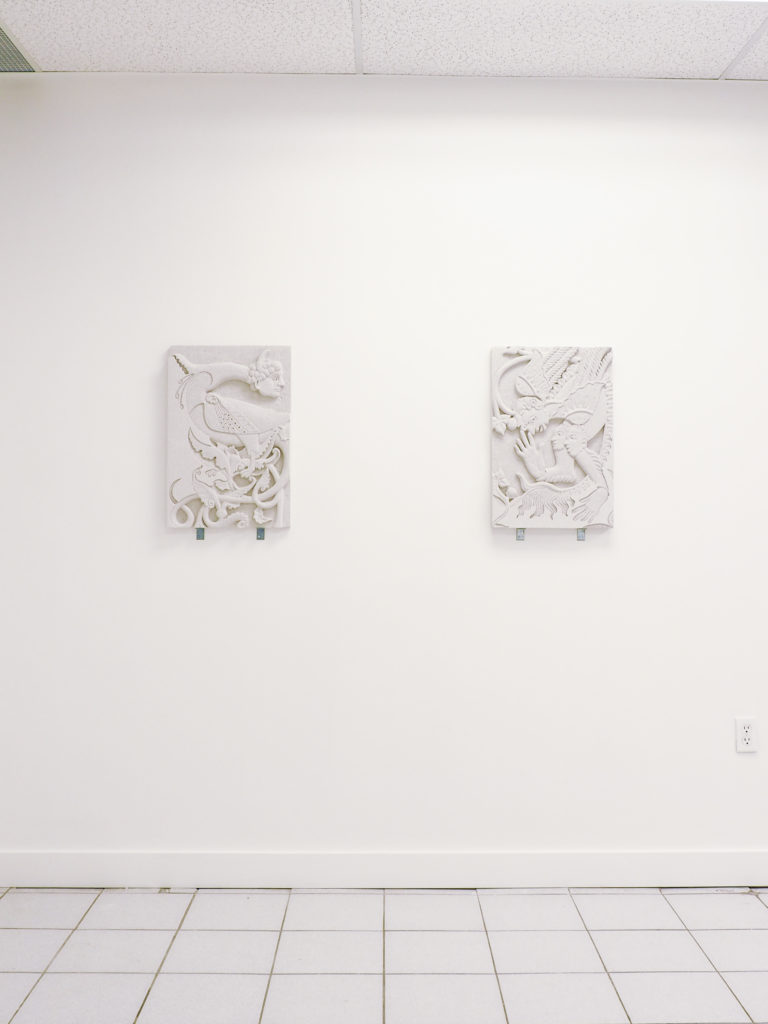 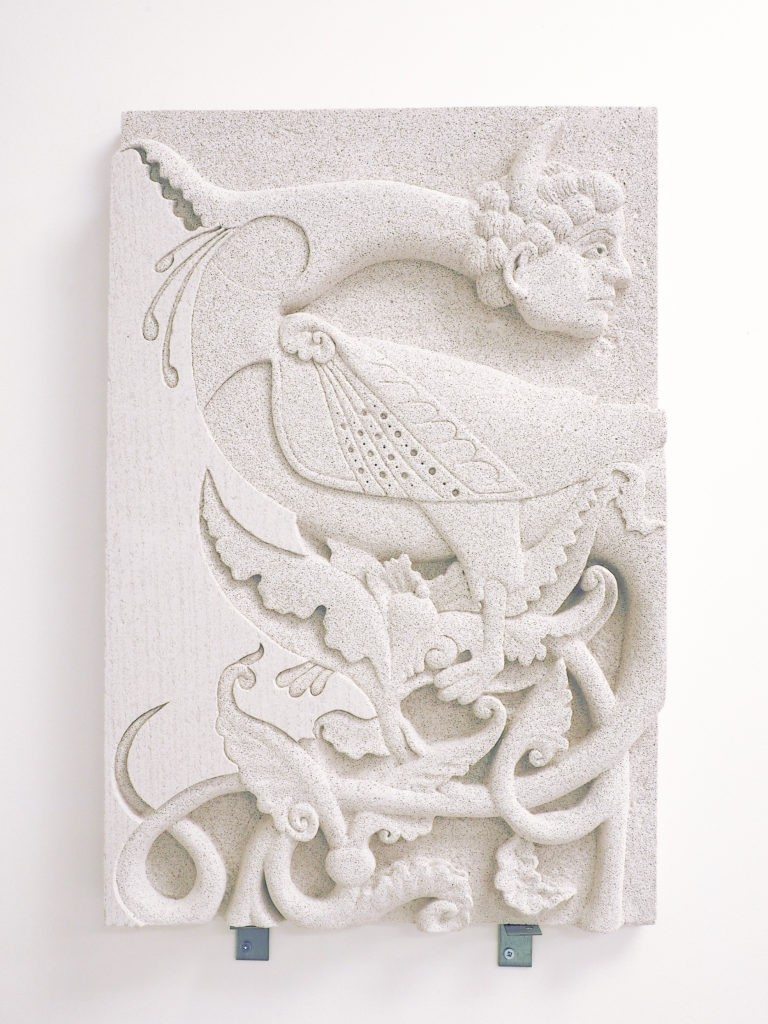 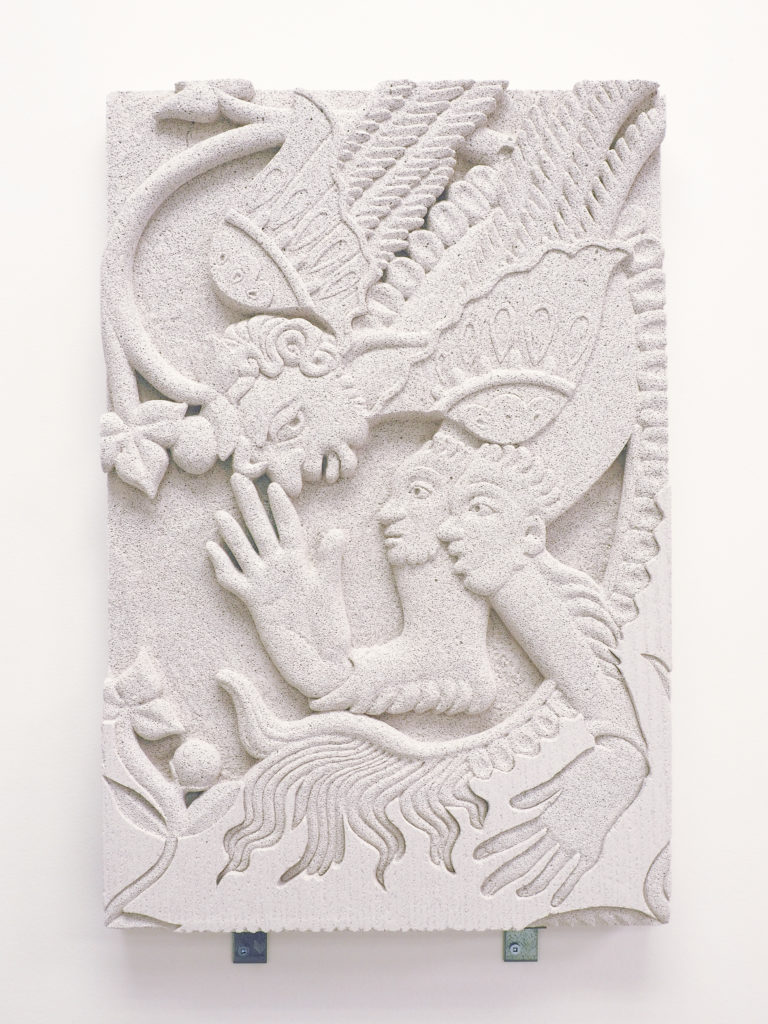 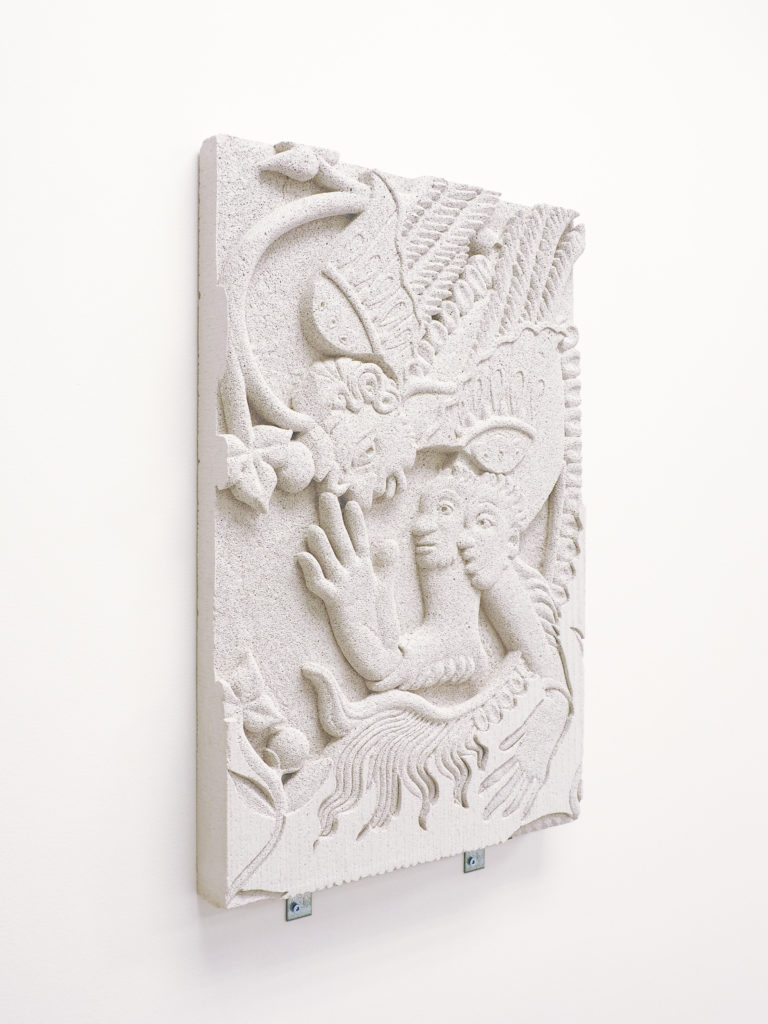 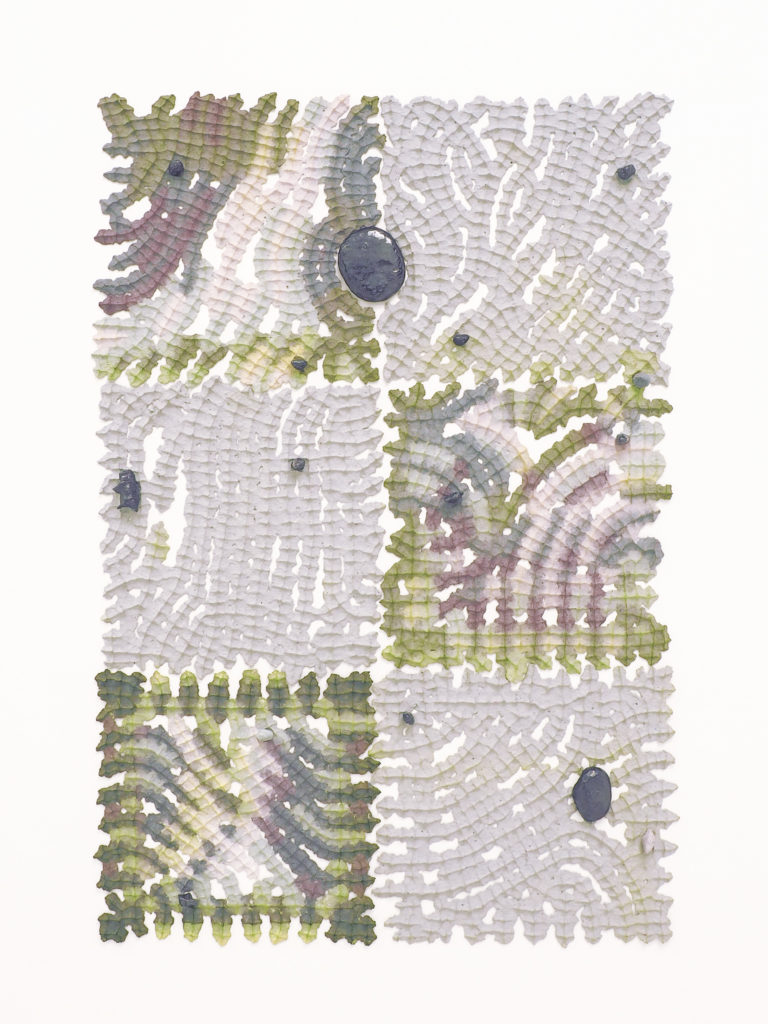 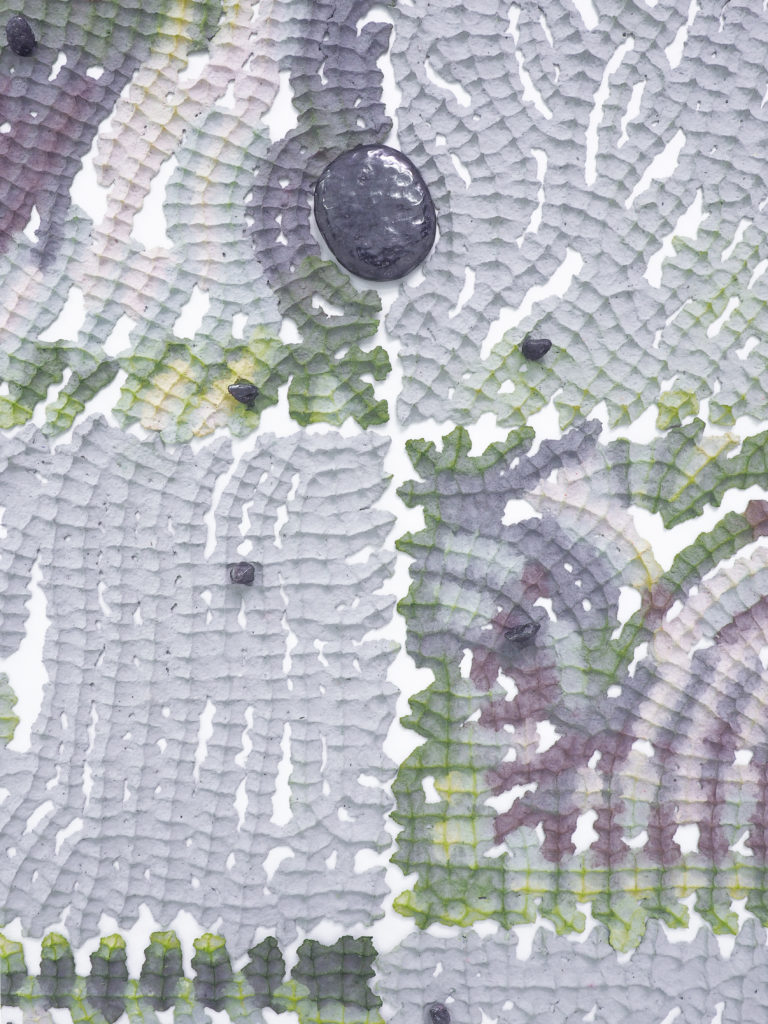 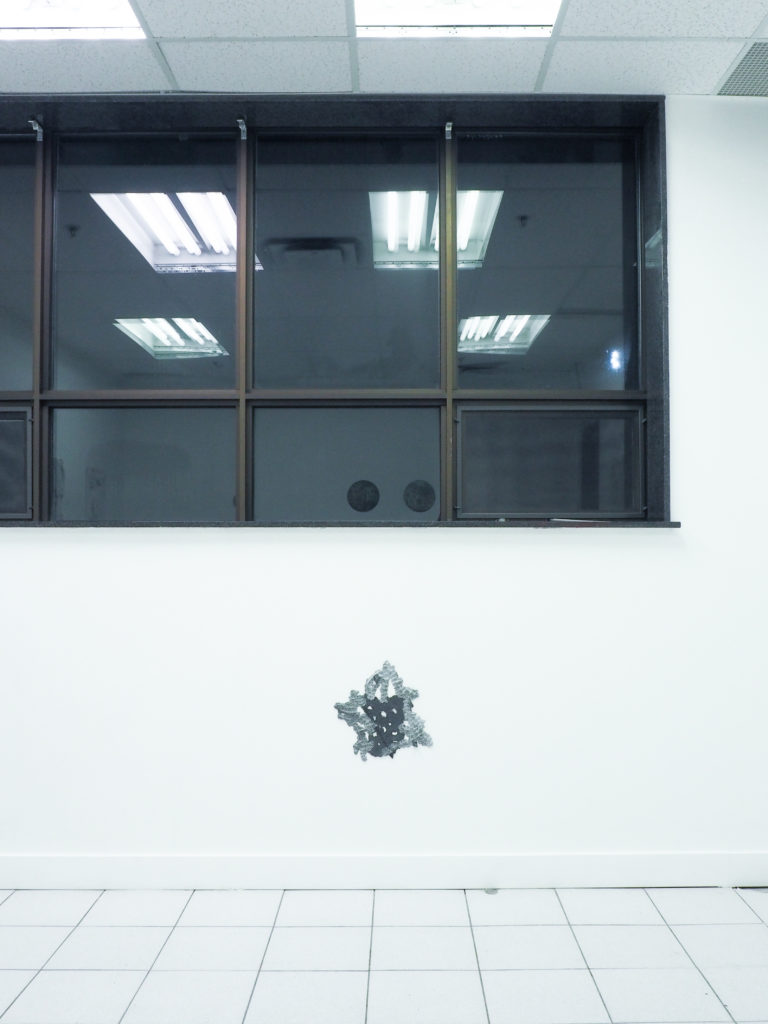 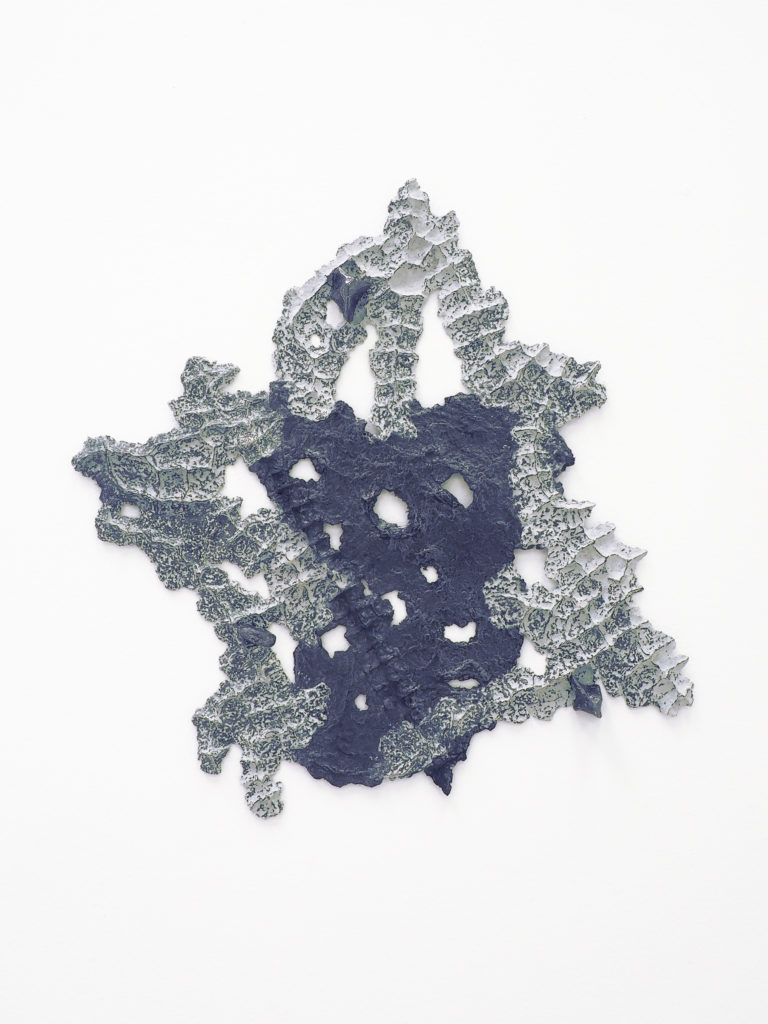 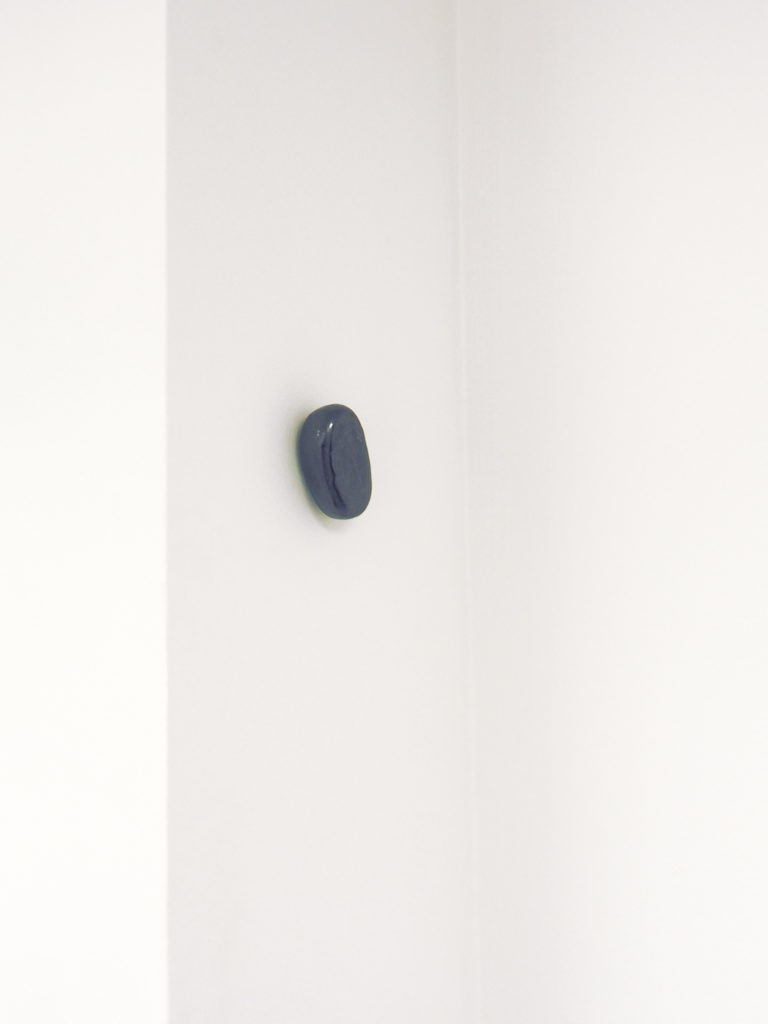 I stretch beyond the bounds of the world,
I’m smaller than a worm, outstrip the sun,
I shine more brightly than the moon. The swelling seas,
the fair face of the earth and all the green fields,
are within my clasp. I cover the depths,
and plunge beneath hell; I ascend above heaven,
highland of renown; I reach beyond
the boundaries of the land of blessed angels.
I fill far and wide all the corners of the earth
and the ocean streams. Say what my name is.
Riddle 66, Exeter Riddle Book

Grabbing a vine that turns out to be a neck, or an arm. This is vicious humour.

A procession of eyes, parading hands, staring and poking. Something is happening at the margins. Flesh, or fleshy matter, subtly changes, with nuances of colour and copies of nature and structure. Like a chameleon.

The space itself has its grid redoubled upon itself; the floor is inverted. Shapes mirror shapes, finding aspects shining, porous, sleek, and in relief. They imitate each other, taking the appearance of something else instead.

Gilles Manero (b.1955, Gien, France) studied printmaking at the Ecole Estienne in Paris. He worked at a photoengraving company and is now retired. He has exhibited extensively in France as well as in Belgium, the Netherlands and Australia. He participated in the New York Outsider Art Fair from 2004 to 2008 with Galerie Dean Jensen (Milwaukee, USA). His work is in the public collections of several museums dedicated to outsider art, including the Musée de la Création Franche (Begles, France), Stadshof Museum (Zwolle, Netherlands), Museo de Navarra (Pampelune, Spain), El Museo de Arte Naïf (Figueres, Spain), and the private the collection of Dino Menozzi (Italy). Manero lives and works in Rauzan, France.

Sif Itona Westerberg (b.1985, Copenhagen, Denmark) received her BFA from the Funen Art Academy in Odense in 2009 and graduated from the sculpture department at the Royal Danish Academy in Copenhagen in 2014. She has exhibited extensively in Denmark at the Odense Sculpture Triennial, M100 Gallery (Odense); ARoS Triennial, ARoS Aarhus Art Museum, Jacob Bjørn Gallery, Godsbanen (Aarhus); New Shelter Plan, KANT Gallery, Martin Asbæk Gallery, and Den Frie Centre of Contemporary Art (Copenhagen). She has an upcoming solo show in May 2019, Fauntin, curated by Toke Lykkeberg at Tranen (Hellerup). Westerberg lives and works in Copenhagen, Denmark.

Thea Yabut (b. 1985, Vancouver, Canada) received her MFA from Western University (London, ON) in 2013 and her BFA from Alberta College of Art and Design (Calgary, AB) in 2007. Her works have been shown across Canada at MacLaren Art Centre (Barrie, ON), Support (London, ON), Cooper Cole (Toronto, ON), and La Centrale Galerie Powerhouse (Montreal, QC). She recently participated in the group exhibition Object of Desire curated by Amanda Martinez at Tiger Strikes Asteriod (Brooklyn, NY) and had a solo exhibition VIBRISSA at L’INCONNUE (Montreal, QC). She has received numerous grants from the Ontario Arts Council, including the Emerging Artist Grant. She is represented by L’INCONNUE in Montreal, who will be presenting her work at NADA’s New York Gallery Open 2019. Yabut lives and works in Montreal, Canada.