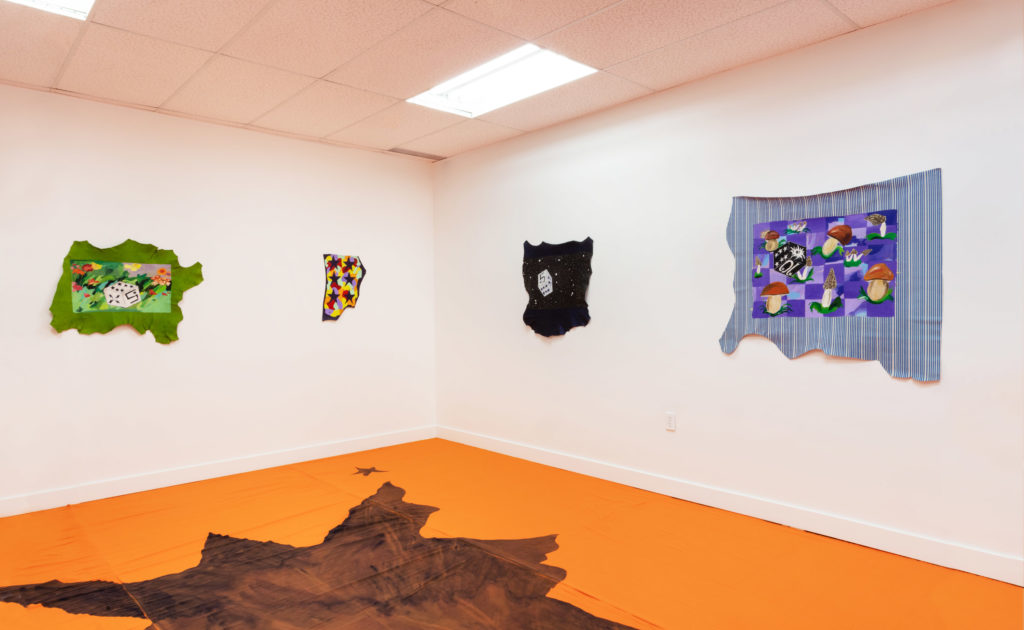 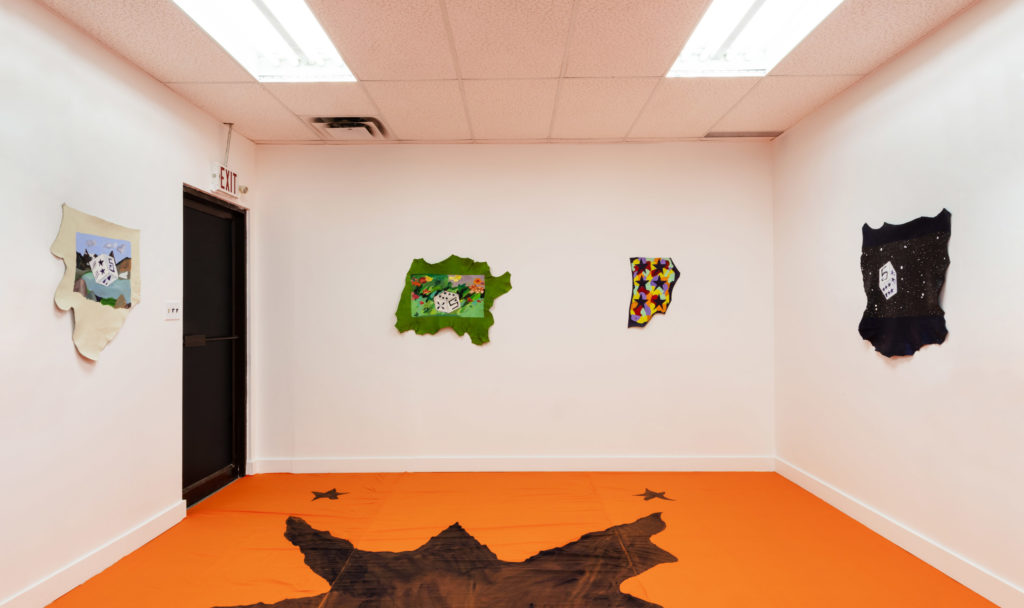 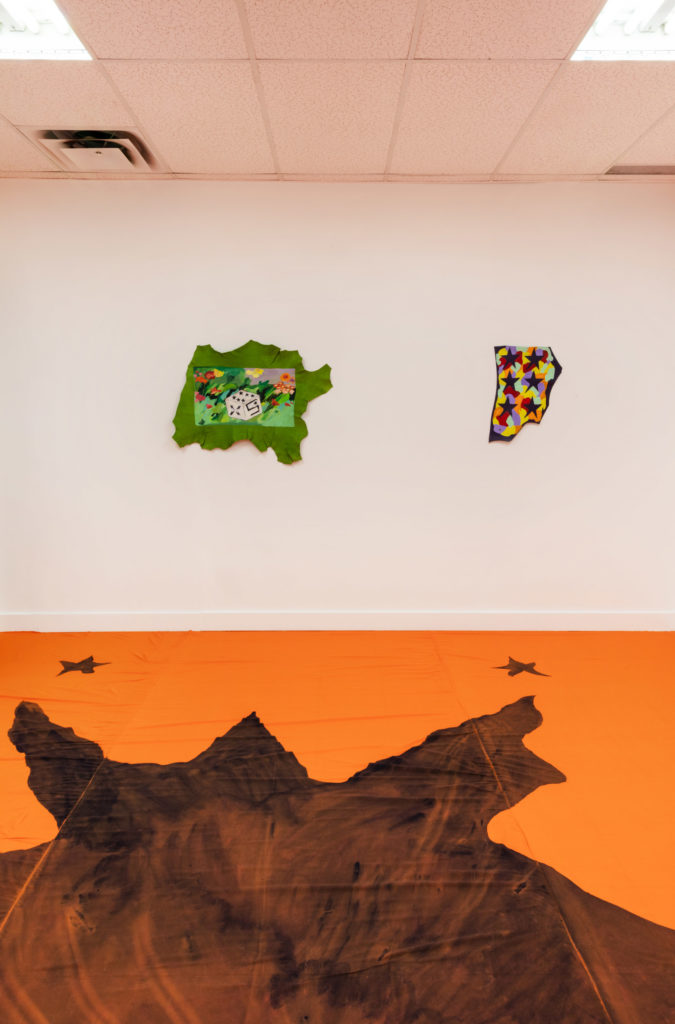 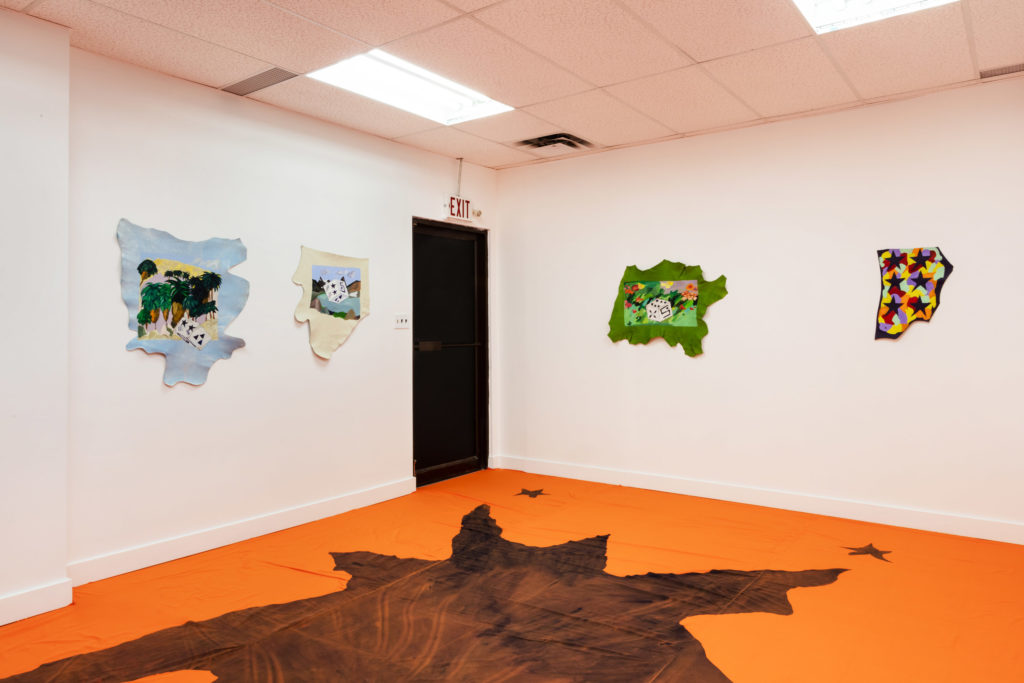 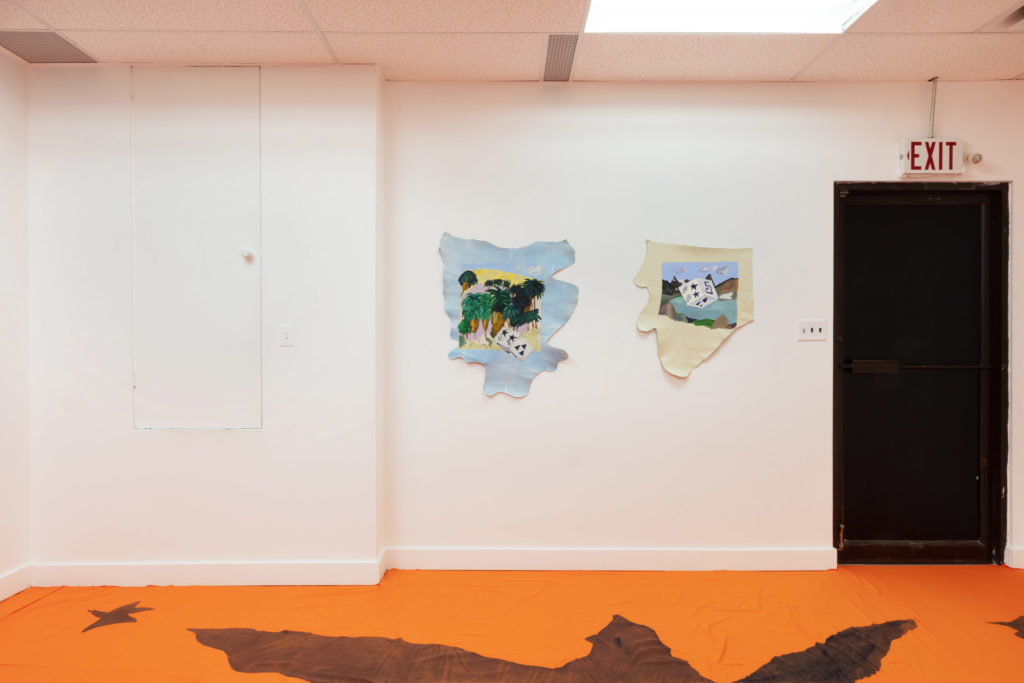 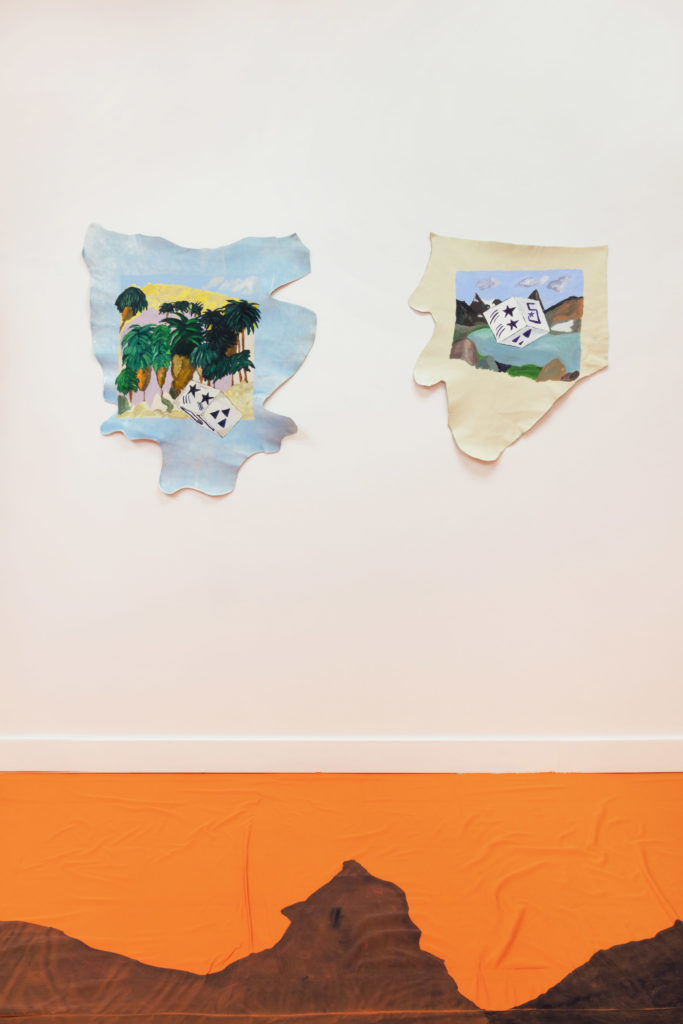 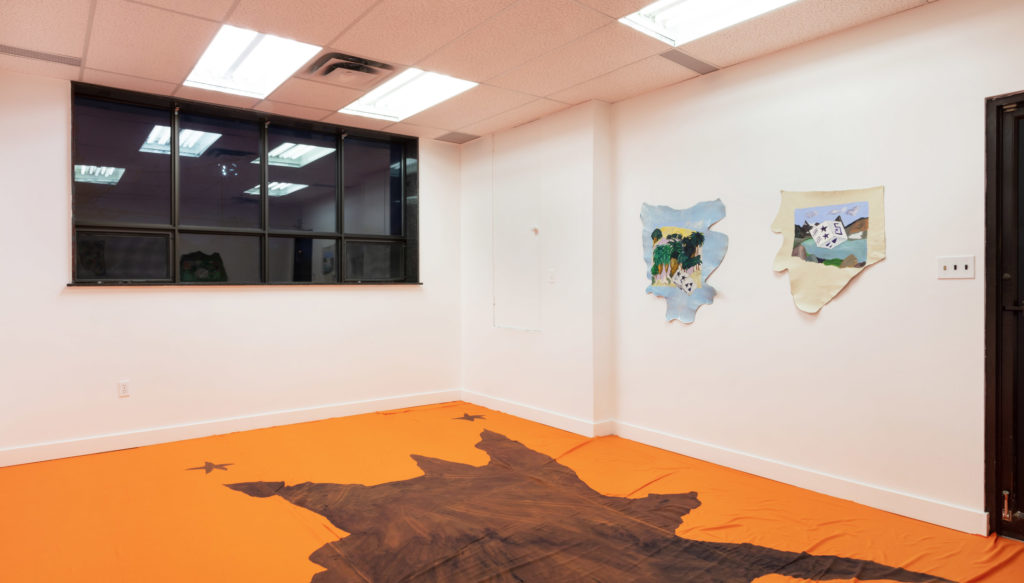 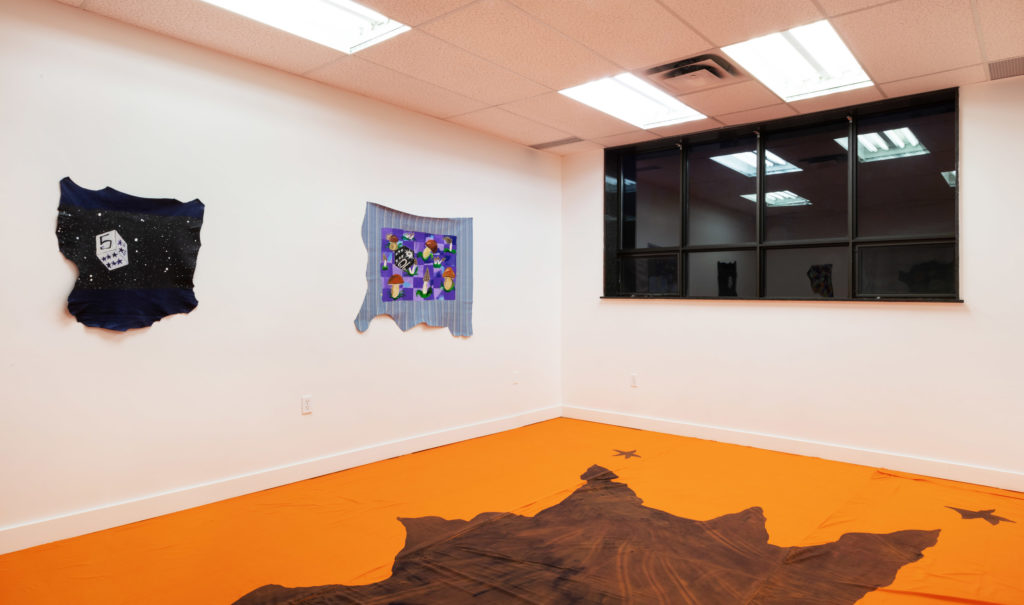 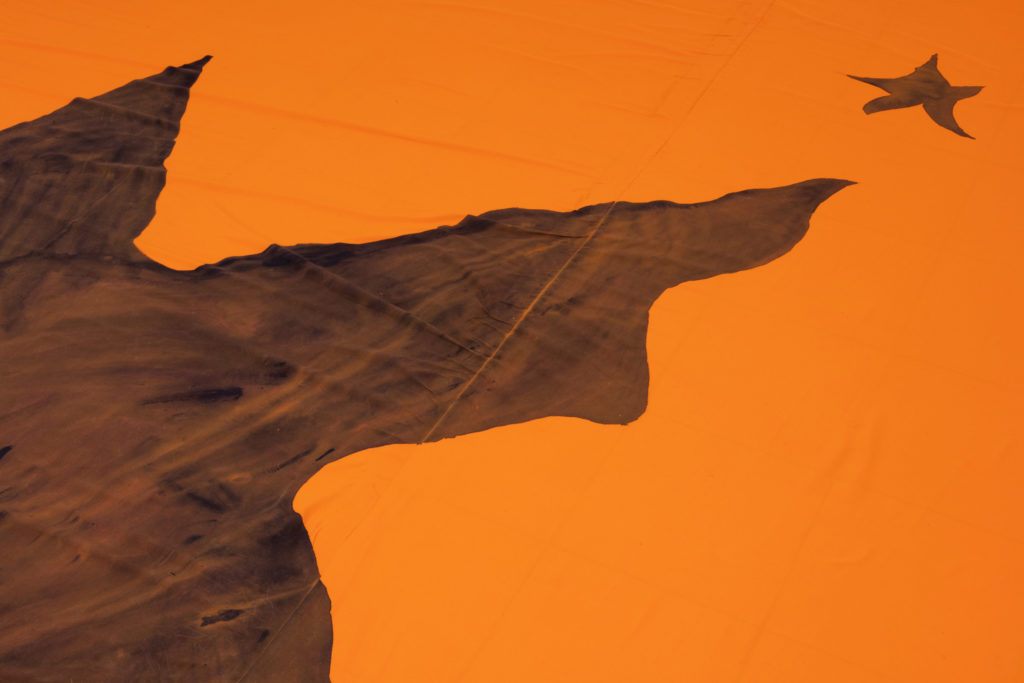 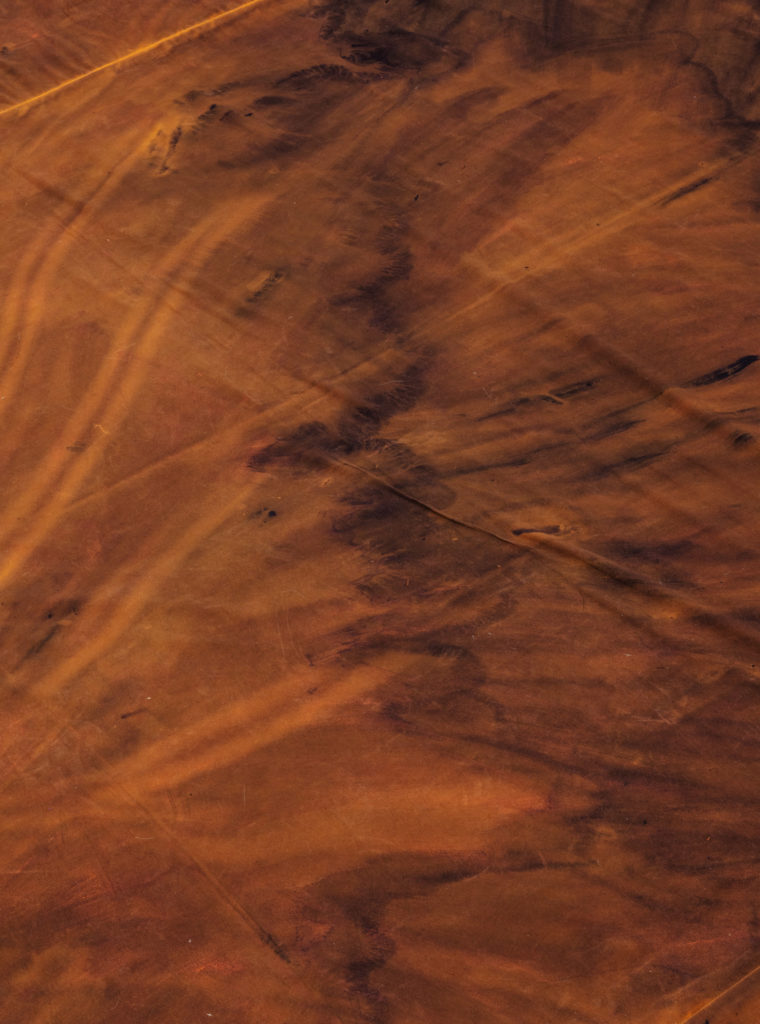 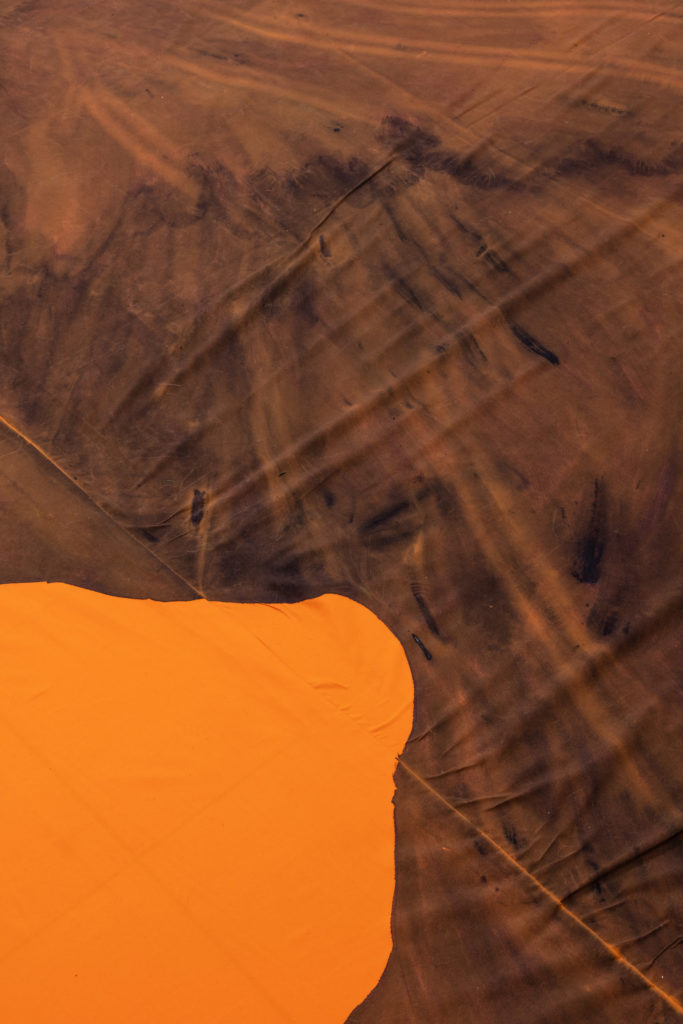 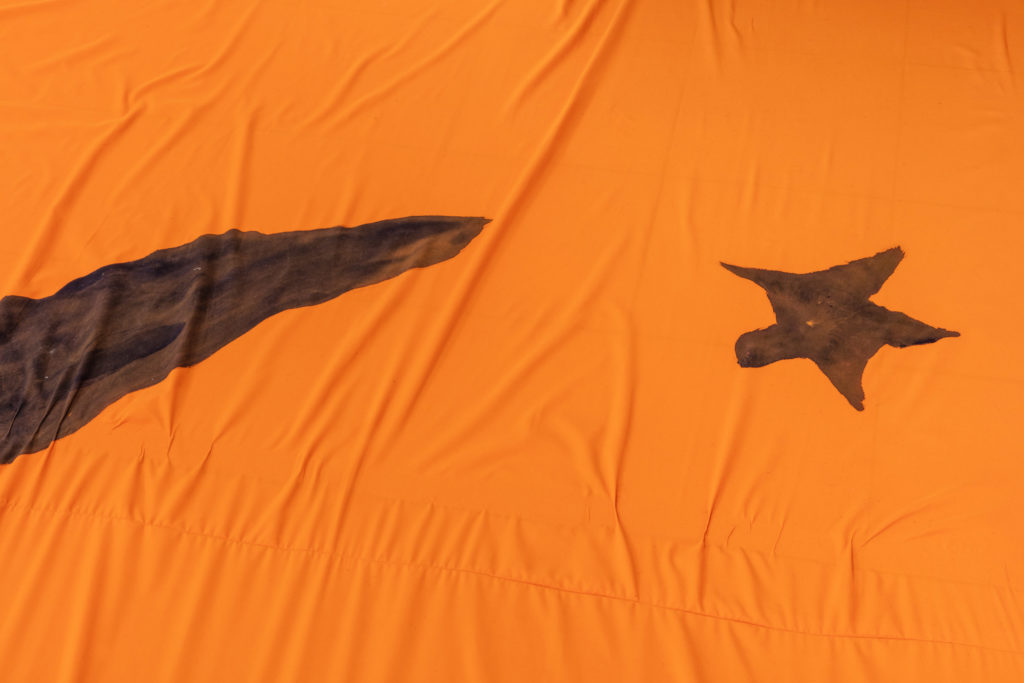 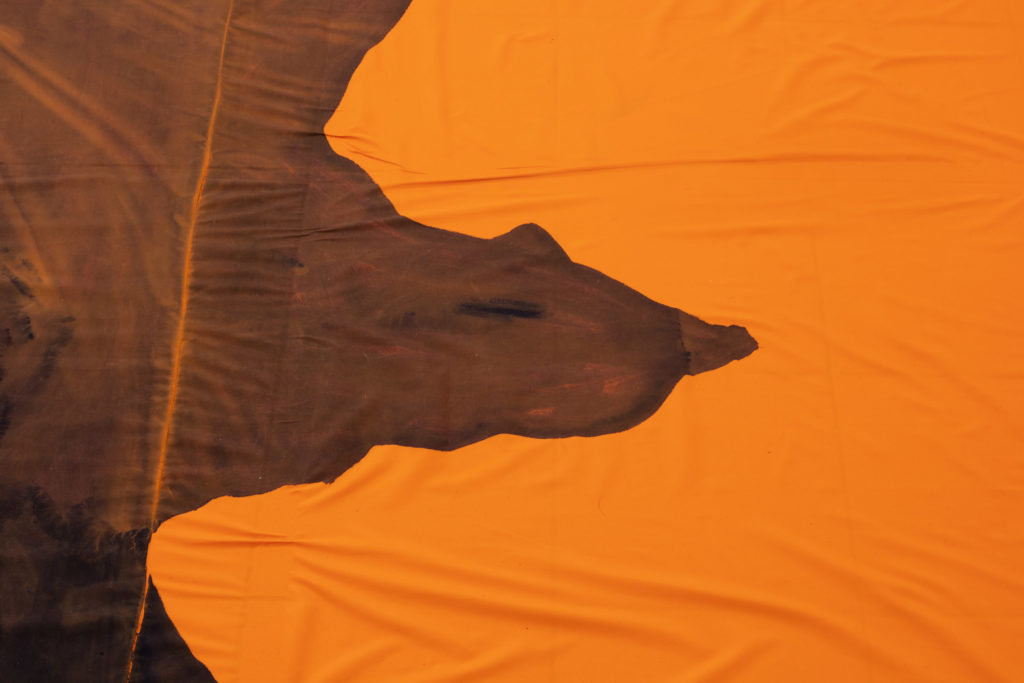 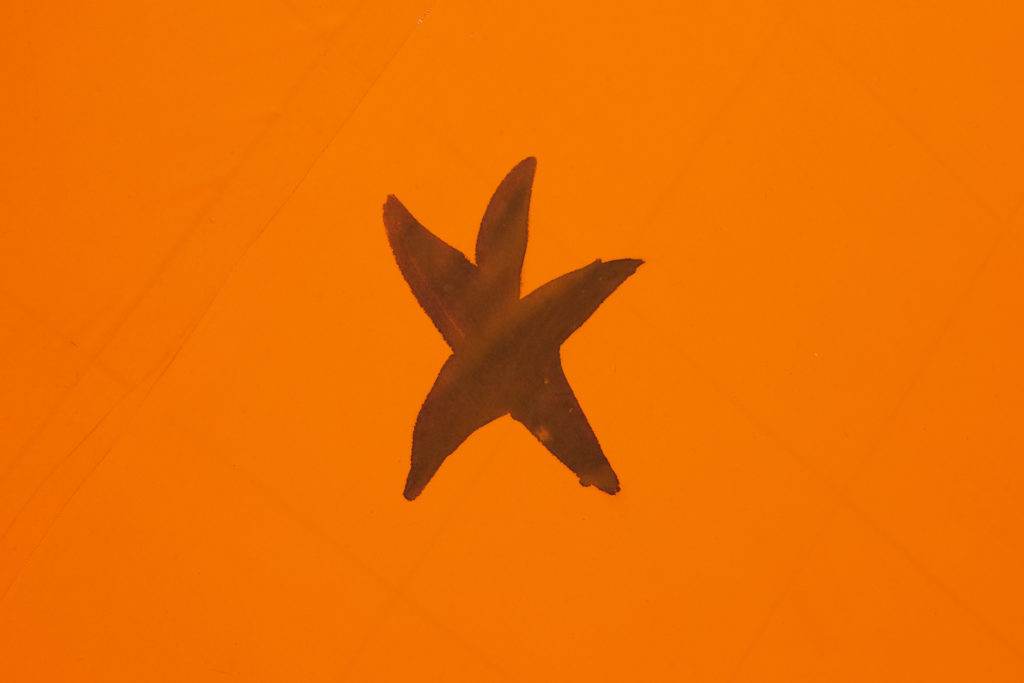 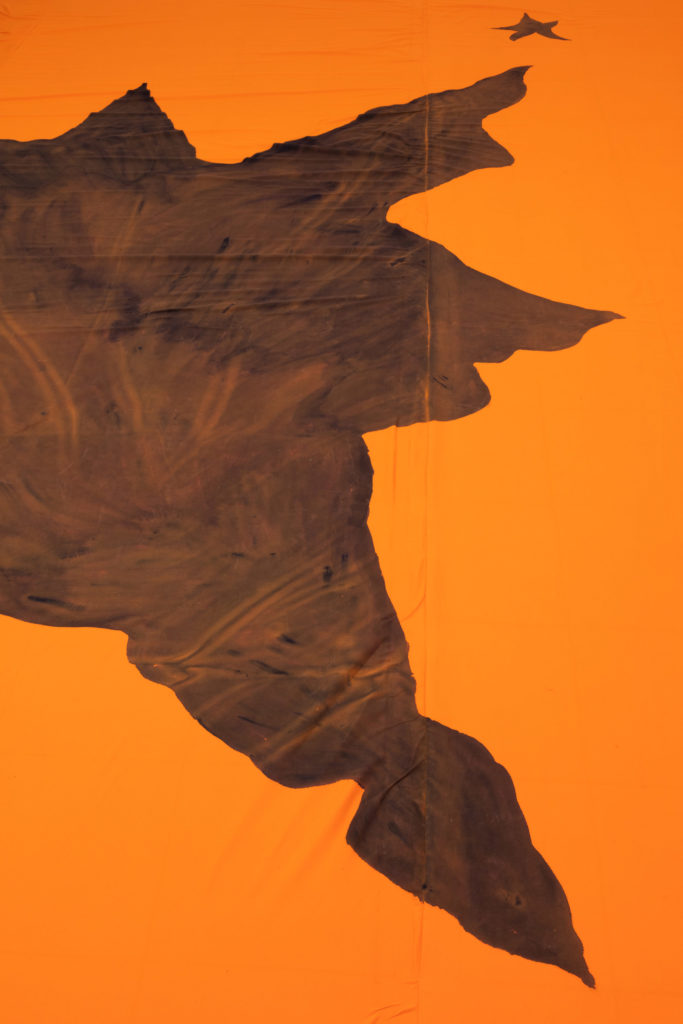 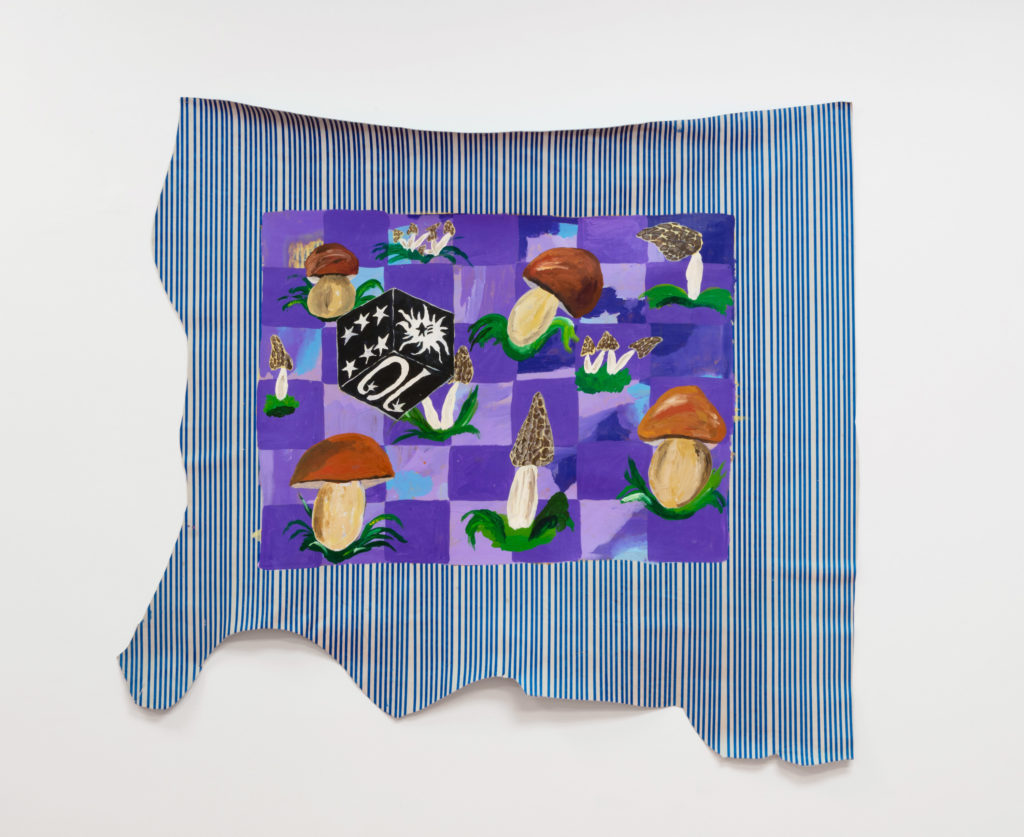 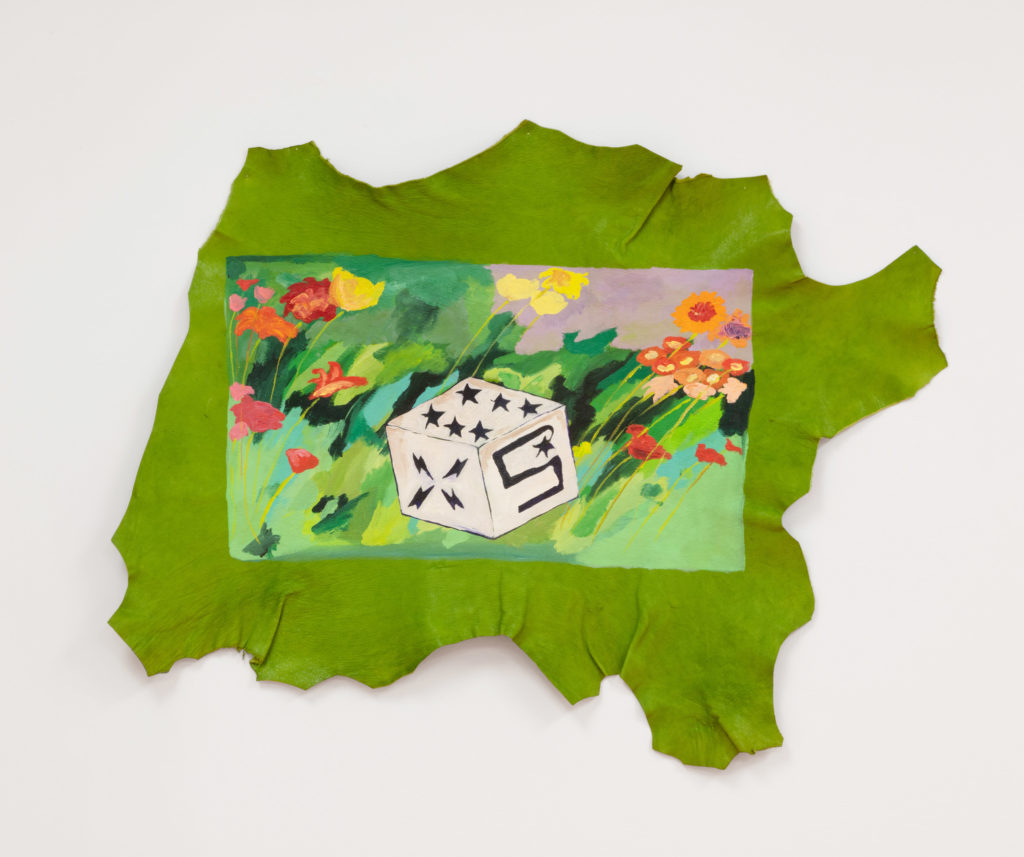 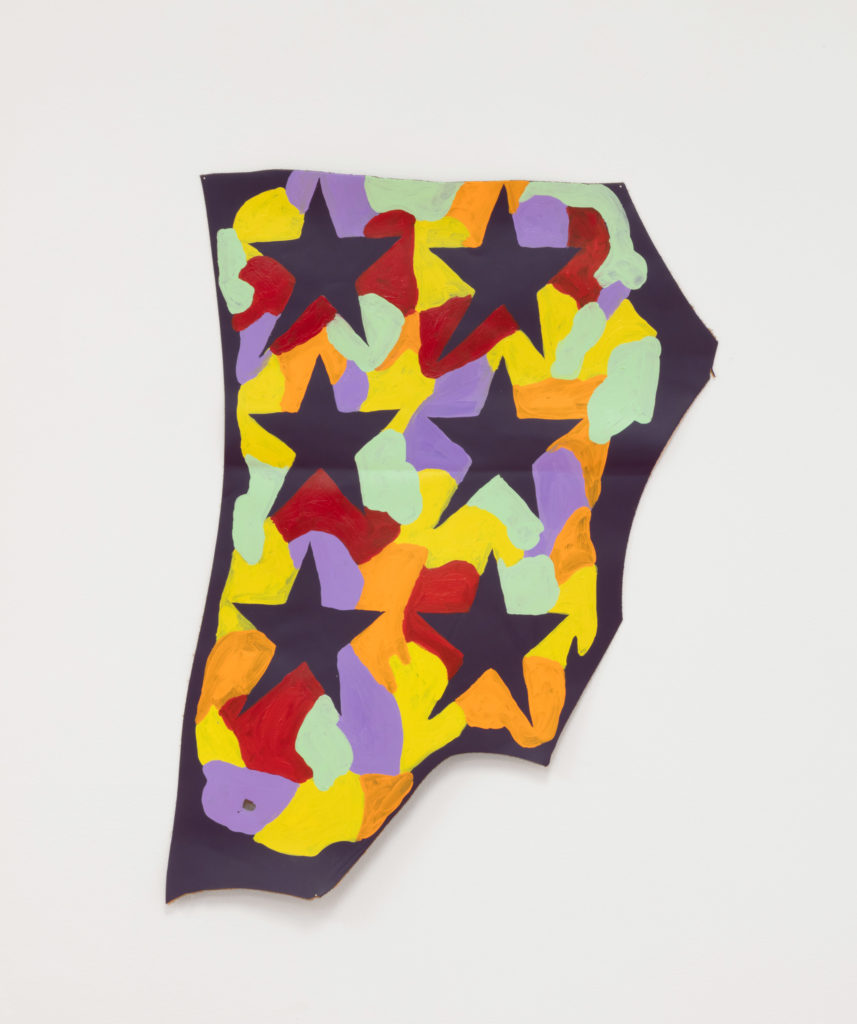 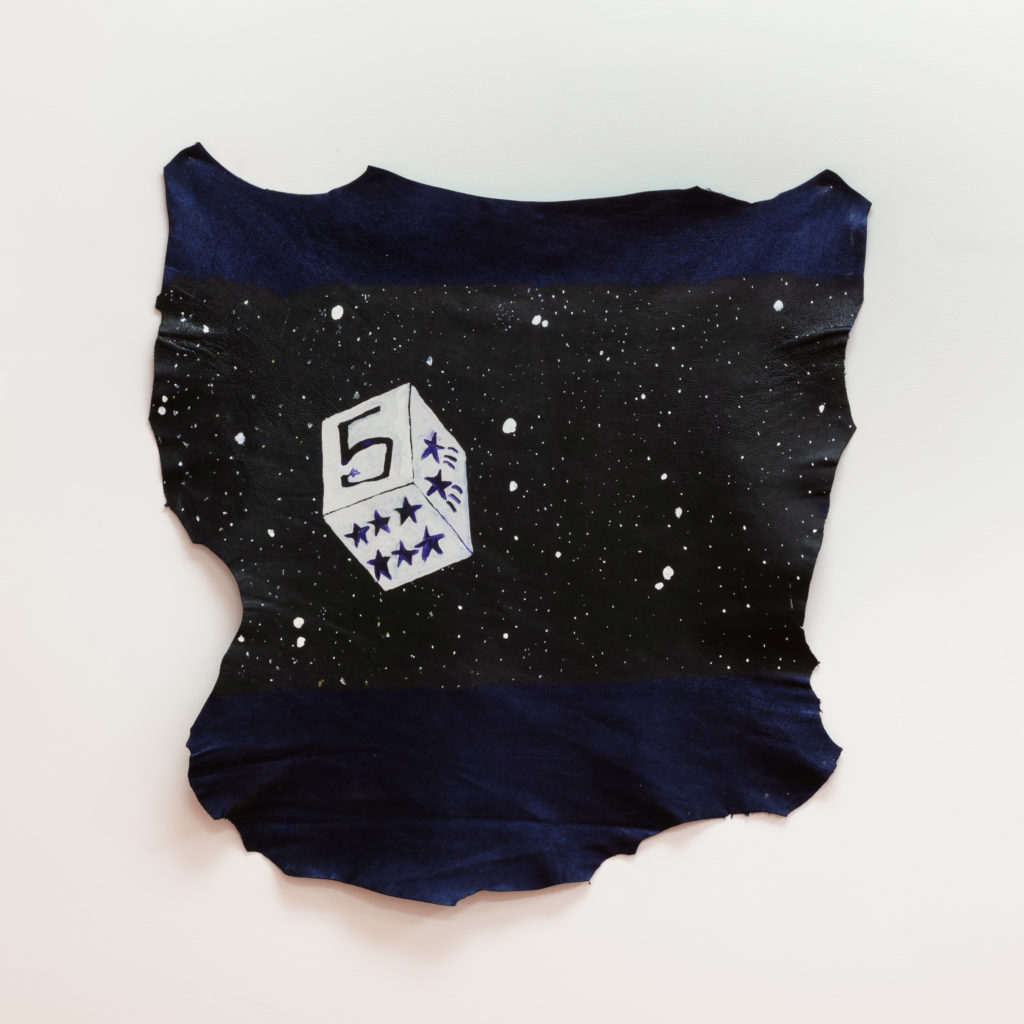 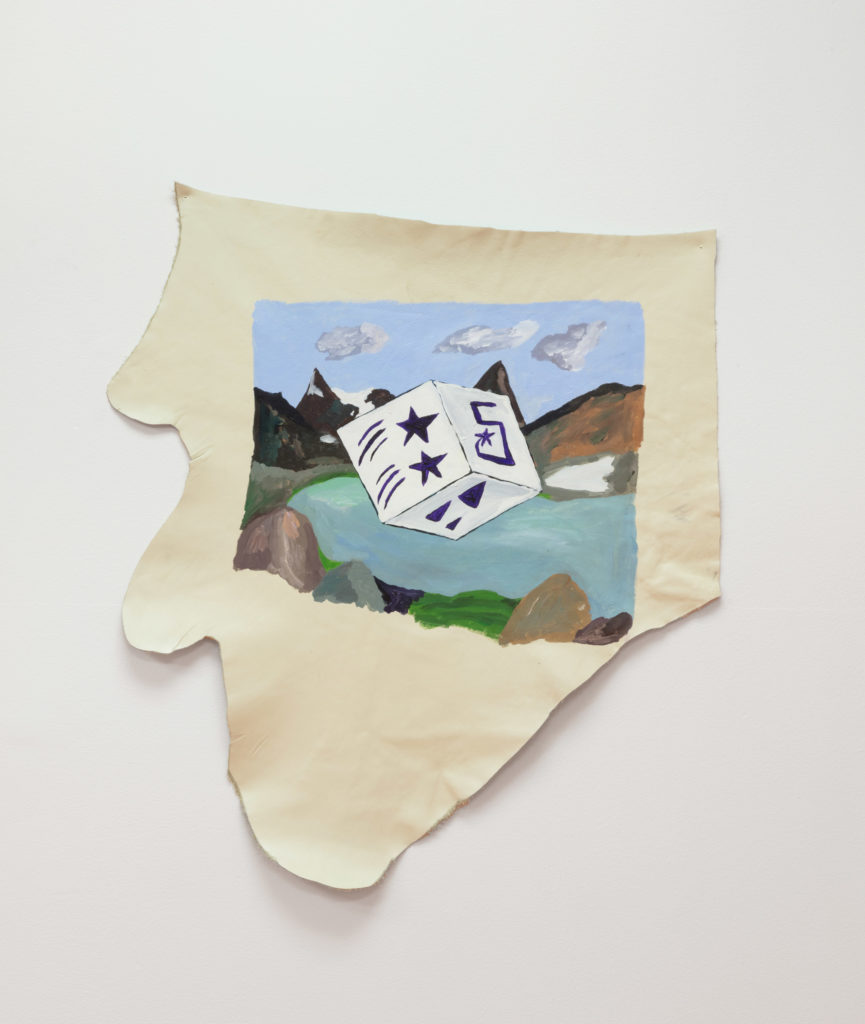 — It is an acronym from the dice game Cosmic Wimpout, short for “You May Not Want To But You Must.” It’s a rule that stipulates when a player has scored on all five dice, normally they could stop, play it safe, and not roll again, but if you score on all five dice, you have to roll the dice again, increasing your chances of losing all of your points in that turn but also increasing your chances of scoring many, many points. Cosmic Wimpout is a dice game produced by C3, Inc. in 1976. The game is played with five custom dice. Sometimes players use a piece of cloth or felt available in various colors and designs as a type of game board.

— What appeals to you about this game?

— The game is very much about chance. I am interested in the history of the game, and in the subcultures that it exists in, for example, in Berkeley, California, and the Grateful Dead. Many Grateful Dead fans became believers in the game of Wimpout. “Cosmic” means of or relating to the cosmos but it also means relating to the universe and the natural processes that happen in it. This dice game can be played anywhere, in a field of flowers, underneath a starry sky, out in the desert,

et cetera. The location in which Cosmic Wimpout is played is arbitrary, it can be played anywhere, it democratizes locality. I also love the design of the game, the new-age style symbols on the dice. Cosmic Wimpout allows people to simultaneously push their luck while also letting people play it safe. In times like these, who can really play it safe?

— Chance is an important element in your practice. Can you tell us more about it?

— When talking about “chance,” I am talking about taking one thing out of context and placing it into another context. Interpretation is determined by site, so if we change the site then the interpretation or meaning is now rearranged, or unfixed. The outcome? Free association. What does this dice game mean in different locations? Chance, will power, karma, it’s in the cosmos. There is common ground between Dada art, experience, and Cosmic Wimpout.

— It’s interesting that you refer to the nomadic aspect of the game. The works in the show are made of leather and polyester, soft materials that allow a certain flexibility. Can we talk about the material’s impact on your work?

— These are new paintings on leather. I feel painting on leather is closer to working on paper than canvas. I’ve been thinking a lot about artificial stimuli and affect display (if objects can have an affective display), verbal and non verbal ways of communication, how certain objects have their own ontology, and the concept of “being distracted” as a general way to make work. I haven’t cleaned up the edges of the leather, I like the way they are. Leather as a skin carries a lot, but I feel that the leather as a material is culturally so far removed from the animal, maybe that’s more what I mean than artificial, it is this cultural signifier for so many things, that a painting on leather, to me, seems like a hyperreal way to make a picture, because it is so far removed from the source.

Micah Wood (b. 1988, Bedford, Iowa) received his Master of Fine Arts from California College of the Arts, San Francisco, CA in 2015. He works in a variety of media including painting, sculpture and performance. The imagery found throughout Wood’s paintings oscillates between found images, advertising, and automatic drawing. His paintings are informed by many different sources, from his automatic drawing process to Rube Goldberg machines and fringe theories. Recent solo and group exhibitions include Simultanhalle, Moscow Museum of Modern Art (Moscow, Russia), Héctor Escandon (Mexico City, Mexico), Johansson Projects (Oakland, CA), Egyptian Arts and Antiques (Los Angeles, CA), and the Fondation Des Etats-Unis (Paris, France). He was a co-director of City Limits Gallery in Oakland, CA from 2016-2018 where he organized several solo and group exhibitions. Wood lives and works in Los Angeles, CA, USA.